Wholesale Distribution Trends and Strategy for 2019

Wholesale Distribution Trends and Strategy for 2019

Each year, NetSuite partners with Modern Distribution Management to survey executives, managers and employees across a variety of sectors about their predictions for 2019 wholesale distribution trends and how it will affect their strategy. The white paper examines:

Read our summary below and download the full report for more information.

While sales growth outlook is strong, expectations are diminished slightly from their levels in 2018. Respondents believe their company will see business growth in 2019; however, they expect the level at which they grow to drop slightly. For example, in 2018, 28 percent of respondents said they expect their business to grow 10 percent or more. This statistic dropped to 23 percent for 2019. However, respondents expecting growth between 5 to 10 percent rose from 47 to 54 percent. 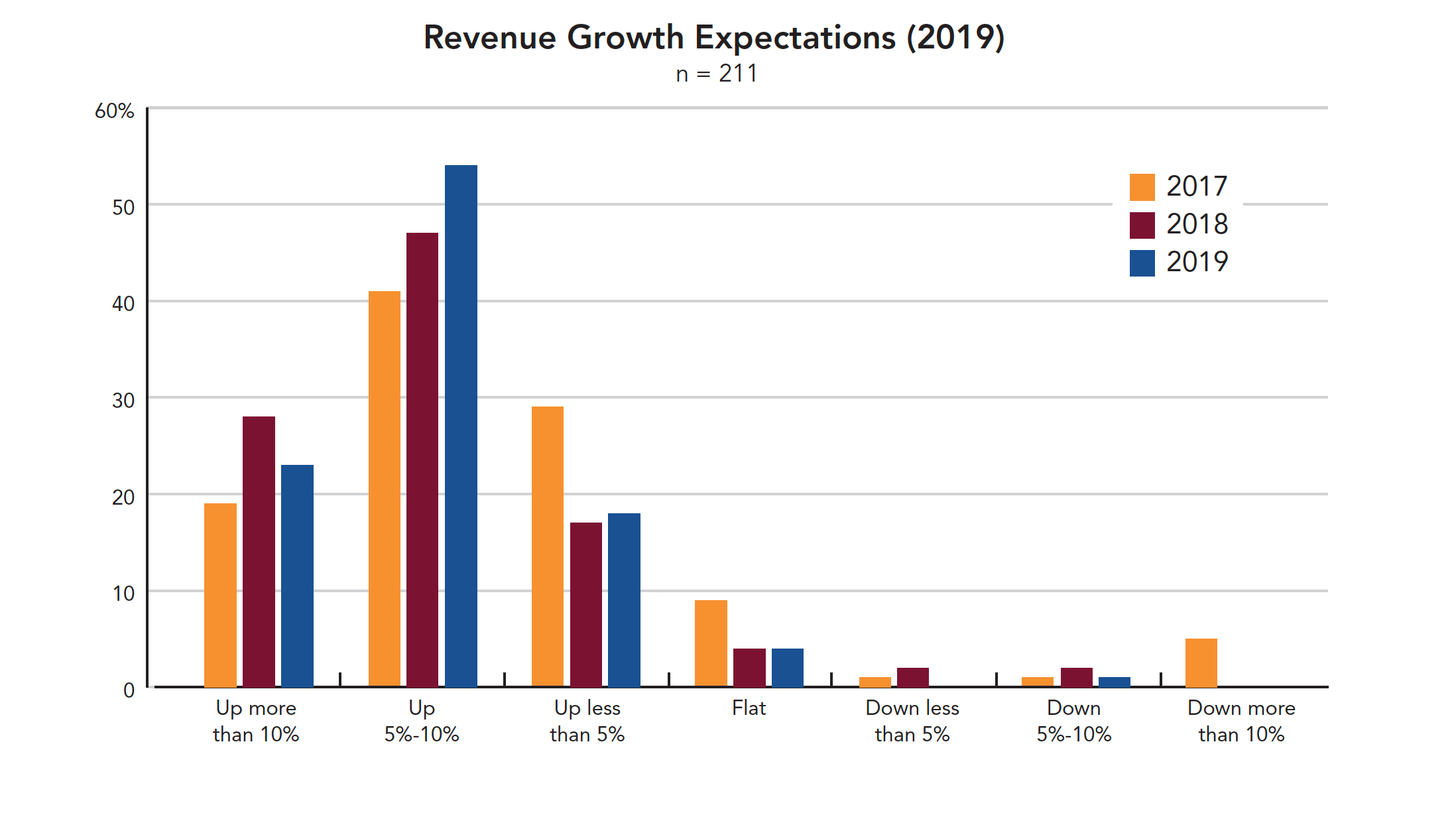 Priorities in 2019 at the company level revolved mainly around business finances and customer service and satisfaction. Respondents provided their top three priorities for the coming year, with the number one priority being revenue growth at 74 percent. This was followed closely by increasing profitability and customer retention. One response illustrates these concerns: “Customers are the heart of the business. Margin is being eroded by tariff pressure, which stifles revenue growth.”

Tariffs aren’t just a concern at the company level – they appeared prominently in answers about the top three industry-level concerns. Many respondents express uncertainty in related areas as well, including the global economy, costs and another recession. Amazon’s imposing presence in the industry doesn’t escape mention, with respondents’ uneasy with how to compete with the distribution giant.

Outside of concerns, respondents were asked to identify the top two issues causing them the most difficulty. Tariffs made another appearance, as well as overall uncertainty based in the global economy as a whole, naming the trade war with China a top cause. Employee retention was also an issue. Respondents in executive and managerial roles said their company has trouble finding and holding on to qualified employees, leading to staffing problems, training concerns and technical proficiency.

Technology adoption, or the lack thereof, within the wholesale distribution industry ranks as another top challenge. However, it’s less to do with being recognized as necessary, but rather that it’s ever-changing and complex. Wholesale distribution software, while effective, presents a bevy of issues for companies. Respondents name increased IT costs, working across multiple ERP systems and out-of-date processes as their main obstacles.

Wholesale distribution strategy for boosting profits is split between two differing revenue streams – by adding new products or product categories and growing revenue from their existing customers. However, these reflect the same focus respondents had last year.

One significant change from 2018 is the strategy – 17 percent view expanding sales teams as one of their top three priorities for 2019, a sharp drop from the previous year. With adding new sales channels as a priority more respondents listed in their top three, this may reflect a change in how companies approach their sales tactics as e-commerce increases its influence. 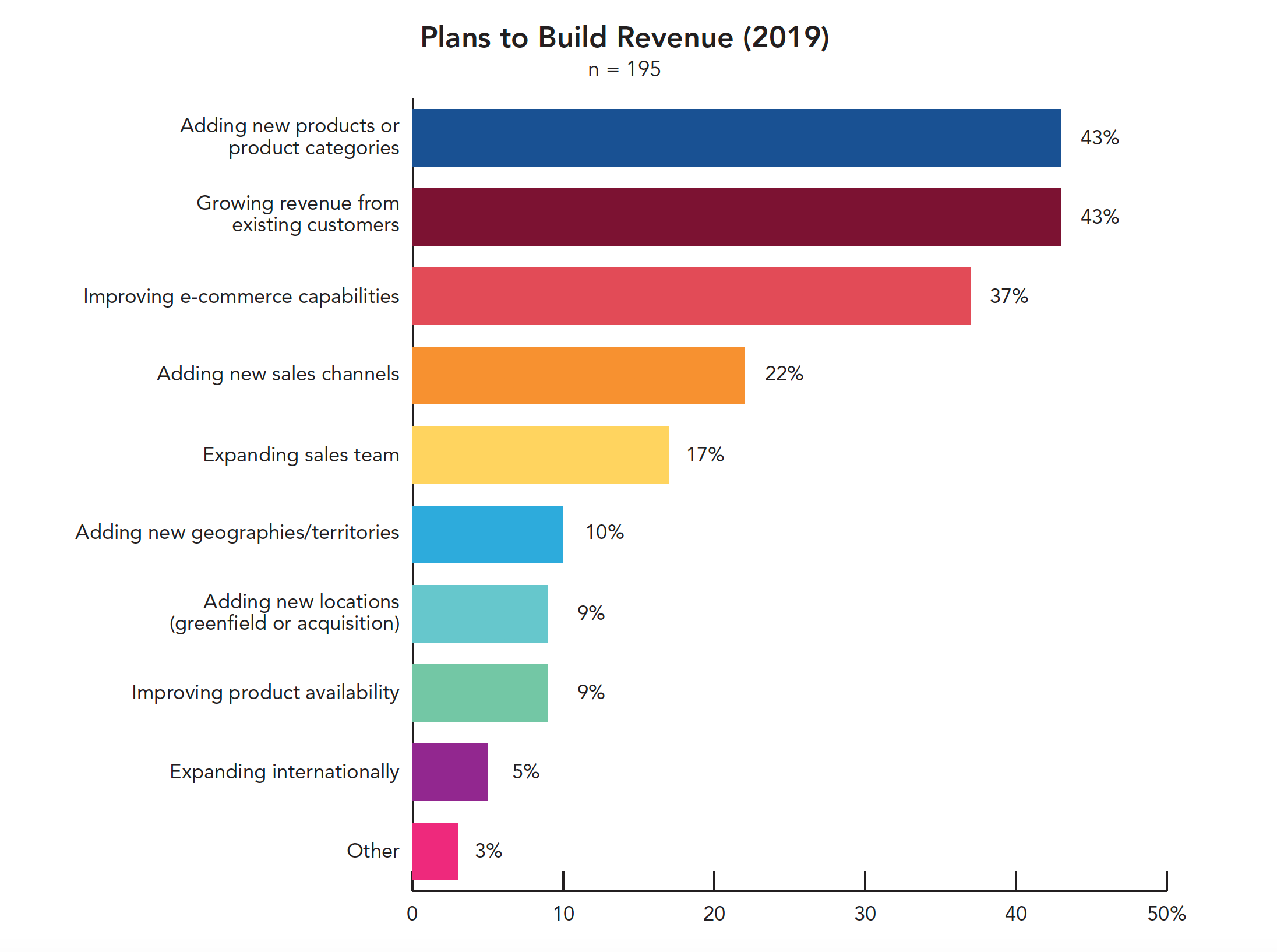 While the top three strategies for cutting business costs in 2019 are the same from the previous year, emphasis on streamlining and/or automating processes rose by 12 percent. This marks the largest increase of all categories listed. Alternatively, cutting IT budgets received the second-lowest percentage of responses during the survey at 2 percent, highlighting a focus on using technology to cut costs at the company level.

E-commerce is here to stay, according to respondents’ technology plans for 2019. In its fourth consecutive year topping the list, companies recognize the importance of adopting e-commerce within the industry, but likely encounter challenges and significant demands when implementing solutions.

Although there is discussion abound that the U.S. economy will end its current historic expansion and slowdown in the coming year, wholesale distribution industry trends portray a positive outlook. Industry leaders indicate they expect that if there is an impending economic downtown, it will be a slowdown and not a full recession.

Terillium is an award-winning Oracle Platinum Partner specialized in Enterprise Resource Planning consulting for consulting for Oracle JD Edwards, ERP Cloud, and NetSuite. Contact us to learn more about how we help businesses in the wholesale distribution industry.

How to Get Started with Better Warehouse Inventory Management